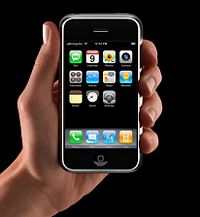 The iPhone[1] is the world's first commercially distributed touch-screen mobile device which uses tactile input from one's finger and does not require a tracker, stylus pen or other intermediary sensing device.

In addition to the revolutionary touch-screen, the Apple iPhone has some other innovative features including:

The iPhone campaign represents one of the most hyped electronics campaigns to date. It seems as though no other technology was talked about as early before its release as the iPhone. It is unclear how the hype, release and subsequent sales and growth trajectory of the iPhone will ultimately effect the Apple brand, but overall the long-term effect seems to be positive.

As a result of the hype, however, there were a lot of misconceptions about the iPhone and its associated technology.[2]

Until recently, Third (3rd)-Party Developers were limited in what they could do in terms of building applications that could interact with the iPhone, a limitation that many analysts, and fans alike, feared would prevent the iPhone from being considered a true SmartPhone[3]. Originally the strict development licenses and closed, proprietary SDKs and code APIs were reserved only for Apple employees. After public outcry and some complaints from even the most loyal Apple users, finally Apple has opened up the iPhone to 3rd-Party Developers[4].