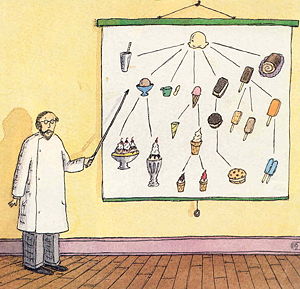 Ontology is the structure of meaning within a given domain, reality or world. An ontology in Software Engineering[1] requires research, study, design, management and architecture with great attention to details. Ontology[2] is studied by many other disciplines as well, from Psychology to Philosophy and Mathematics to the Sciences.

"An ontology is a specification of a conceptualization." [3]

"A translation approach to portable ontologies."[4]

"Web ontologies describe the relationships between entities, usually referred to as "kinds", and how the different kinds of entities are related."[5]

"the branch of metaphysics dealing with the nature of being"[6]

"the set of entities presupposed by a theory"[8]

"The subject of ontology is the study of the categories of things that exist or may exist in some domain. The product of such a study, called an ontology, is a catalog of the types of things that are assumed to exist in a domain of interest D from the perspective of a person who uses a language L for the purpose of talking about (describing) D."[9]

Last but not least, the technical description from Wikipedia:

"In theory, an ontology is a "formal, explicit specification of a shared conceptualization". An ontology renders shared vocabulary and taxonomy, which models a domain — that is, the definition of objects and/or concepts, and their properties and relations.

Ontologies are the structural frameworks for organizing information and are used in artificial intelligence, the Semantic Web, systems engineering, software engineering, biomedical informatics, library science, enterprise bookmarking, and information architecture as a form of knowledge representation about the world or some part of it. The creation of domain ontologies is also fundamental to the definition and use of an enterprise architecture framework.

The term ontology has its origin in philosophy, and has been applied in many different ways. The word "ontology" comes from the Greek ὄν (on), which literally means 'existence'. The core meaning within computer science is a model for describing the world that consists of a set of types, properties, and relationship types. Exactly what is provided around these varies, but they are the essentials of an ontology. There is also generally an expectation that there be a close resemblance between the real world and the features of the model in an ontology.

Historically, ontologies arise out of the branch of philosophy known as metaphysics, which deals with the nature of reality – of what exists. This fundamental branch is concerned with analyzing various types or modes of existence, often with special attention to the relations between particulars and universals, between intrinsic and extrinsic properties, and between essence and existence. The traditional goal of ontological inquiry in particular is to divide the world "at its joints", to discover those fundamental categories, or kinds, into which the world’s objects naturally fall.

During the second half of the 20th century, philosophers extensively debated the possible methods or approaches to building ontologies, without actually building any very elaborate ontologies themselves. By contrast, computer scientists were building some large and robust ontologies (such as WordNet and Cyc) with comparatively little debate over how they were built.

Since the mid-1970s, researchers in the field of artificial intelligence (AI) have recognized that capturing knowledge is the key to building large and powerful AI systems. AI researchers argued that they could create new ontologies as computational models that enable certain kinds of automated reasoning. In the 1980s, the AI community began to use the term ontology to refer to both a theory of a modeled world and a component of knowledge systems. Some researchers, drawing inspiration from philosophical ontologies, viewed computational ontology as a kind of applied philosophy." [10]

Reading through these separate definitions should paint a reasonable picture of what an Ontology is; though as with any Ontology itself, it is clear that (despite some overlap in ideas) not everyone agrees on a single definition or view of the concept. The underlying principle though, seems to be description(s) about a perception of a thing or group of things in the world, whether those things are tangible or intangible, physical or virtual, in existence or simply imagined.

GoodRelations is a lightweight ontology for annotating offerings on the Web. It is to our knowledge the first non-toy vocabulary for describing the types of goods and terms and conditions of items and services offered on the Web. The GoodRelations ontology complements products and services ontologies, like eClassOWL, by providing the vocabulary for expressing things like