Difference between revisions of "Rules" 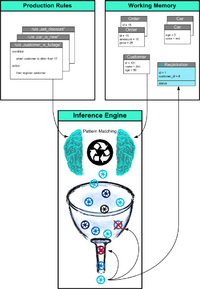 Rules are logical limitations or conditional cases placed upon a set of data or transfer of data.

The mission of the Rule Interchange Format (RIF) Working Group is to produce W3C Recommendations for rules interchange, which could support each of its predecessor languages: SWRL, RuleML, POSL and other derivaties such as Drools Business Rules, BPML or BPEL.

"Rules in (and for) the Web have become a mainstream topic since inference rules were marked up for E-Commerce and were identified as a Design Issue of the Semantic Web, and since transformation rules were put to practice for document generation from a central XML repository (as used here). Moreover, rules have continued to play an important role in AI shells for knowledge-based systems and in Intelligent Agents, today both needing a Web interchange format, and such XML/RDF-standardized rules are now also usable for the declarative specification of Web Services."

POSL is the grandfather of the RIF standard and started as a research initiative into Rule Engines at NRC-IIT (in Canada).

The (raw) input would look as follows:

The Nurse object would correspond to some data or query built into the system, such as the SQL statement:

(although it wouldn't necessarily need to be SQL, and data or object persistence system could be interacted with to do the inference).

The inference would then occur according to the definition of the action which was to "notify" the Nurse (in a specific programming language, i.e. Java):